What would you do for love? 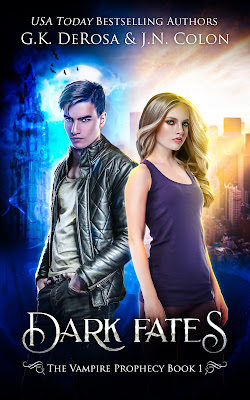 A high-ranking official’s daughter, Solaris is wild and reckless, a daredevil with no regard for authority.​

For icy Kaige, the nocturne prince of Draconis, life is discipline and self-control.​

A prophecy split their worlds in two—a decree issued outlawing all human and vampire contact.  Death is the consequence for crossing the dark divide between Imera and Draconis.
When their worlds collide, a dangerous and forbidden string of events unfold.  Bound together by blood and secrets, they make a startling discovery that could shatter the precarious balance of New Isos. ​


Can Solaris and Kaige discover the truth without triggering the century old prophecy and destroying both their worlds?

Secrets have a way of coming out. 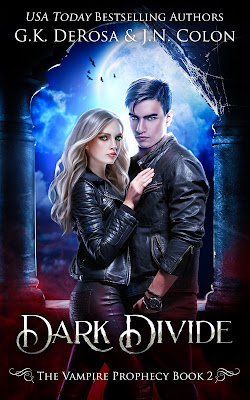 Divided by the dark wasteland between worlds, Kaige and Solaris deal with the consequences of their blood bond and the dangerous secrets they share.

Their attempt at normalcy is quickly interrupted when Solaris stumbles upon a gruesome discovery in Imera, one The Collective would kill to keep quiet.  Kaige risks everything to save her, realizing becoming king is the only option.

With Solaris in hiding, their forbidden feelings spiral out of control. As Kaige struggles to protect her, they learn the truth behind Draconis’s darkest secret.  As it turns out, the prophecy isn’t the only thing threatening all of New Isos.

Enemies span both sides of the divide, and they’re rapidly closing in on the star-crossed pair.

Can Kaige and Solaris find a way to stop the hidden horrors within their worlds before the truth gets them killed? There's no stopping a prophecy.


Solaris and Kaige can no longer deny their feelings. And their world is about to pay the ultimate price.

Death is quickly spreading through Imera, endangering all the inhabitants of Draconis in the process. Synth is running out, and the nocturnes are becoming dangerously restless. When rations dip too low for the taranoi, a rebellion erupts and not everyone makes it out alive.

The forbidden couple’s secrets are exposed, making neither world safe for the star-crossed pair. As their enemies draw ever closer, Kaige and Solaris take refuge in the ominous Shadow Lands. There they stumble upon a pivotal discovery that could change everything.

Can Kaige and Solaris stop the disease ravaging the humans and save the nocturnes or will they all perish as the prophecy foretold?

The outcome is a rise in power by as a lot as 20% compared to with} hot rolled steel. SPCC is often used for automotive elements and RING SECURITY CAMERAS some building functions. SPCC can be utilized for galvanized merchandise, appliances, containers, and other merchandise. Sheet metallic is powerful and durable, and sheet metallic elements are sometimes place to} stand up to larger pressure and heat than these made with plastic.