Dark Goddess is available for pre-order on Amazon

The final book in the Divine Darkness series, Dark Goddess, is available for pre-order on Amazon.  It will be released October 29! 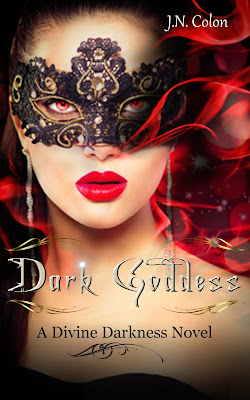 Hayden
Sunrays kissed my skin, dusting my normally pale shade with gold.  Seagulls squawked above and waves crashed against the shore while the salty scent of the ocean penetrated my nose.  Being the dark, brooding god of the Underworld, sunbathing on a beach was not my usual forte.  But Hartley wanted to go and I had trouble denying her just about anything.  Most people did.
My eyes shifted to her lying next to me in a scantily clad red bikini.  A smile curled my lips thinking of the time we were under Hecate’s spell and Hartley donned one similar and lured me to her yard while she was in the hot tub.  T-R-O-U-B-L-E, that’s what she was.  And I loved every bit of her.

Hartley
As soon as we returned to the beach from swimming it started to sprinkle.  I glanced up at the swollen, gray clouds and wondered if Zeke was raining on our parade.  My eyes met Hayden’s and I could tell he was wondering the same.
I suppose it didn’t matter where we were whether it was the beach, my house, his house, or the Underworld, as long as we were together.  I just hated this day was ending for our friends—if it was Zeke’s doing.
Callie, Jake, Hayden and I piled in to Hayden’s new black Tahoe he got specifically so we could carry other people around.  He wouldn’t say so, but he’d do anything to make sure I spent quality time with my friends.  I’d never fully be the Hartley Walker I was before I died and split my soul.  I was okay with that.  I loved my friends, but I also loved the Underworld.  I think Hayden’s finally starting to come around to the idea.  He hasn’t quite noticed me bringing more and more of my belongings to the castle.  If he paid more attention to our room he’d realize half the clothes in his closet were mine.
Boys.  So clueless—even a millennia old Greek god.
“That rain totally came out of nowhere,” Callie said, wrapping a dry towel around her.
Jake draped his arm over her petite shoulders, pulling her close and nearly swallowing her tiny form.  “Yeah I know, but that’s how the weather is in SC babe.”
She nodded, shaking her blonde, shoulder length hair, tricking water into her towel.  “I’m just glad you guys came back in time.  You were swimming forever.  We couldn’t even see you in the ocean.”
My eyes slanted over to Hayden’s while my cheeks flushed thinking about what we’d actually been doing.  He of course smiled like the naughty little boy he was.  I rolled my eyes.  “Yeah.  We were pretty far out.”
Hayden took us on the scenic route through the country side.  The car ride was quiet for a while, the sound of tiny raindrops pattering against the car and cats pawing across the windshield lulled me to sleep.  That was until Hayden slammed on the breaks.
My eyes popped open and I sat up at full attention in time to see a giant wooden wheel careening onto the road before us.  Callie and I both squealed while the guys smashed their arms across our torsos as an extra precaution.  If I wasn’t a demigod Hayden would have bruised my ribs.
“What the hell is that?” Jake asked, leaning his head between the seats, his wet copper hair touching my shoulder.
I watched the wooden wheel teeter and then finally hit the road with a resonating crash.  I glanced over to see Hayden glaring at it, his jaw flexed and body tense.
“What is it?”
“Everyone stay in the car.”  He quickly slipped out.
Like I was going to let him boss me around.  “I’ll be back.”
Hayden wasn’t surprised I followed, but he didn’t appear any less irritated.  I grabbed his hand, his fingers instantly curling around mine.  His face paled as we neared the colossal, man sized wooden wheel.  It looked ancient and charred in places.  Indentions bit into the end of four, equally placed spokes as if something had been bound.
“Shit,” Hayden cursed, his eyes flaming crimson.
“Hayden, what is it?  Where did it come from?”
“Tartarus.”
That one word sent chills trickling down my spine and goose bumps across my flesh.  Well, I guess this was the end of our peaceful life again.