Finish summer with this Urban Fantasy coming in August

Here's another excerpt from Blood Lies! 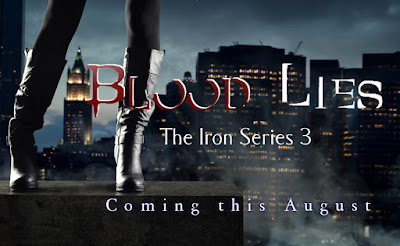 I marched into the guys locker room, getting smacked in the face with a dose of old sweat and socks.  I almost gagged it was so bad.  Several of the guys halted mid motion while some attempted to cover their man parts.
Please.  Like I wanted to see that.
“Where’s Baustic?” I asked a wide-eyed jock next to me who was standing in front of an opened locker in nothing but his boxers.
He simply blinked as if unable to speak and pointed toward the left.  I rolled my eyes and marched toward the edge of the aisle, turning down another to find him about five seconds away from pulling down his jeans.
“Yo Baustic!”
His head snapped in my direction, blue eyes wide with a mixture of shock and confusion.  “K-Kory?”  His voice came out higher than usual.  “What the hell are you doing in here?”
I jerked my chin toward the back of the locker room where the showers were.  “We got some unfinished business.”  My face pulled that characteristic sneer most people were afraid of.  I couldn’t let anyone think I was here for any other reason than to either kick Brett’s ass or collect on a debt.
He glanced around, taking in our audience.  “Yeah, that thing.  Right.”  He zipped up his pants and followed me toward the back out of sight...