The time is nearing... Blood Lies (The Iron Series Book 3) will be released August 31st! 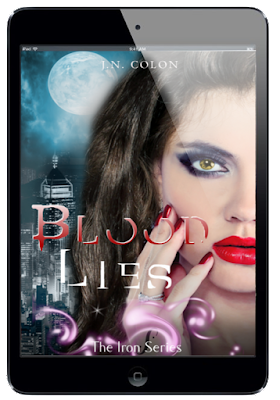 Lies from her past haunt Kory, but that’s not her biggest problem.  It’s the darkness slowly taking over.  Can she stop it?  Does she even want to?

It’s been one week since Kory was forced to do the unthinkable, a decision that continues to haunt her.  But she has Rex by her side, helping her deal with the aftermath and mend her broken heart.  He’s the only thing stable in her ever darkening world… or at least he was until his own past threatens to rip them apart.

Distracted by her emotions Kory makes a life altering choice, possibly dooming her to the worst fate imaginable and the only person capable of pulling her back from the brink abandons her.  In her time of need she turns to an unlikely friend and together they discover secrets about her parents that send the already unhinged demon hunter closer to the point of no return.  And when she’s at her lowest, a dangerous foe captures her with no intentions of letting go.

Will Rex uncover the twisted lies in time to save Kory’s soul or will she bend to the crushing pressure of her darkest parts, bringing him down with her?

And... if you haven't began the series, Blood In Iron (The Iron Series Book 1) will be free to download on Amazon Aug 30th thru Sept 3rd.